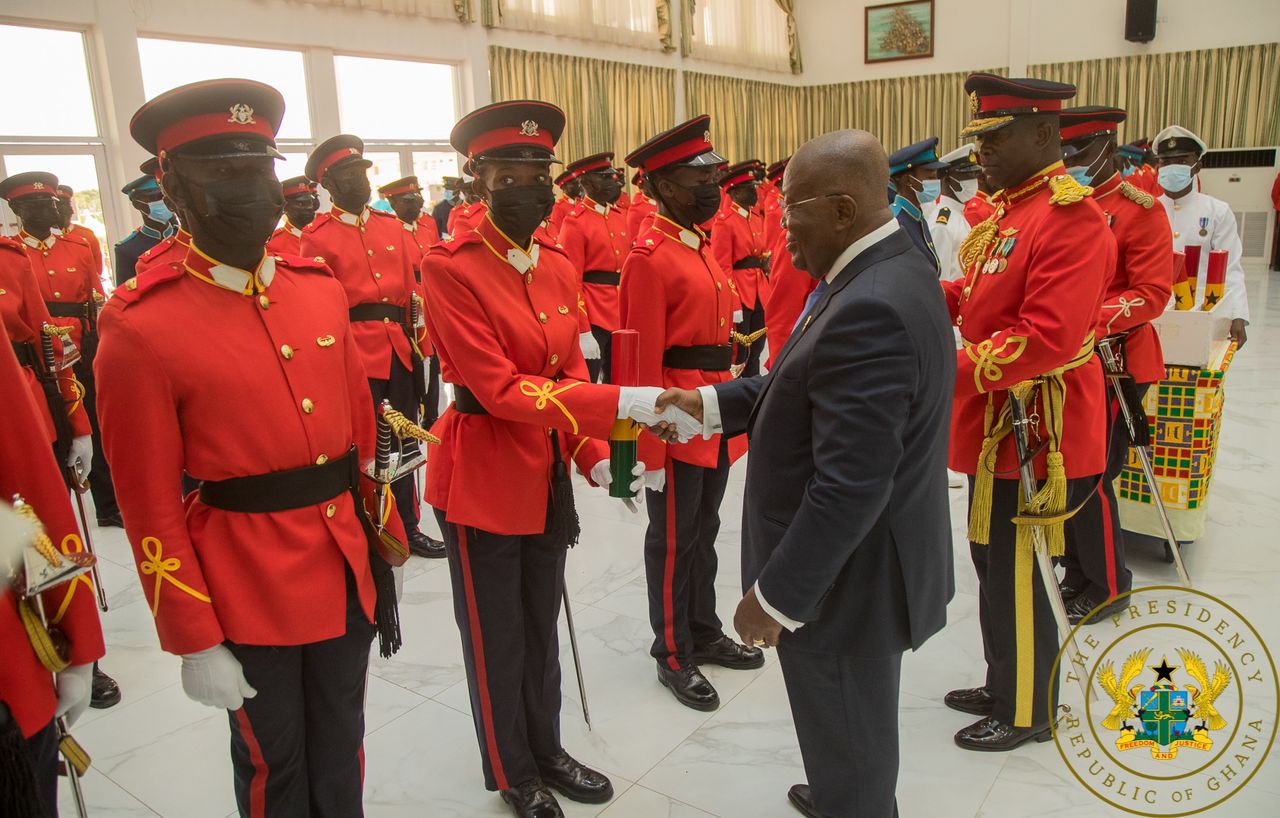 187
The President of the Republic, Nana Addo Dankwa Akufo-Addo, says his government, since assuming office in 2017, has been delivering on its promise to retool and re-equip the Ghana Armed Forces, thereby helping the Force to realise its mandate of protecting the territorial integrity of the nation.
According to President Akufo-Addo, in view of the contemporary, emerging and future threats in West Africa, addressing security issues cannot be business as usual.
“Government has, thus, approved the expansion of the Armed Forces to cater for these threats. The strategic expansion and modernisation of the Armed Forces, in line with the threat analysis and the acquisition of the requisite equipment, logistics, infrastructure development and increase in manpower, are being pursued vigorously,” he said.
Speaking at the Military Academy Graduation parade for Regular Career Course 61, on Friday, 12th August 2022, President Akufo-Addo indicated that Government is reconstructing and upgrading the Ghana Military Academy to bring it at par with other reputable Military Academies across the world.
He noted that the first phase of the construction works of the Military Academy is almost complete, with the renovated Officer Cadets’ Mess, the Academy Parade Square, the three hundred and twenty-seating capacity two-storey classroom block, and the magnificent administration block also completed.
Indeed, the three-storey two hundred and forty-six (246)-room officer cadets’ hostel, the two-bedroom sixteen apartments officer accommodation for platoon commanders, the two-bedroom-four apartments half compound for senior non-commissioned instructors, and the boundary fence wall are virtually complete, with installation of fittings, painting, external works/landscaping and connection for water and electricity expected to be finished by the end of this month.
In terms of manpower expansion, President Akufo-Addo indicated that the Armed Forces has recruited and trained some three thousand (3,000) soldiers between 2017 and 2020.
“It has, since 2021, embarked on accelerated nationwide recruitment and training to churn out a minimum of four thousand (4,000) officers and soldiers annually until 2024, in order to beef up the strength of our Armed Forces to optimal levels. Thus, a minimum of two thousand (2,000) recruits are trained in recruit training schools of the three (3) Services every six months, whilst the strength of officer cadets enlisted in recent times has been increased exponentially since 2020,” the President said.
He continued, “In addition to the construction of the eight hundred and thirty-two (832) accommodation units for the Armed Forces, initiated under the Military Housing Phase One Project in July 2019, which are currently at various levels of completion, I cut the sod a few months ago for the Military Housing Phase 2 Project, which will add three hundred and twenty (320) additional units to the Phase 1 accommodation units.”
President Akufo-Addo noted that there is massive infrastructure development in the vicinity of the Burma Camp Military Cemetery to provide warehouses, offices and barracks accommodation for Base Ordnance Depot, the School of Ordnance, the Armed Forces Central Band and the Armed Forces Music School.
To enhance operational capability, combat efficiency and logistics capacity of the Armed Forces, the President noted that measures have been put in place in furtherance of restructuring and retooling.
“To this end, additional bases, specialised units and brigades have been created, with the acquisition of requisite equipment, to enhance operations particularly along our northern frontiers. As you are aware, this expansion has already seen the creation and establishment of the Army Special Operations Brigade, Armoured Brigade, Signal Brigade, and two (2) Mechanised Battalions, which are deployed in the Upper West and Upper East Regions,” the President said.
He noted that construction and equipping of fifteen (15) Forward Operating Bases (FOBs) across our northern frontiers for the Armed Forces for the Northern Border Project are on track. These FOBs include FOB Dollar Power, FOB Hamile, FOB Tumu, FOB Navrongo, FOBBawku, FOB Nalerigu, FOB Bunkpurugu, FOB Saboba, FOB Bimbilla, FOB Damongo, FOB Bole, FOB Jirapa, Forward Logistics Base at Wa, Forward Logistics Base at Bolgatanga and Main Logistics Base at Tamale.
In addition to this, President Akufo-Addo indicated that a number of combat vehicles, equipment and weaponry, comprising about one hundred and sixty three (163) Armoured Personnel Carriers and other combat vehicles, trucks and general vehicles, surveillance and communication equipment, including optical and critical mass of night vision equipment, as well as weapons, ammunitions and body armour, have been acquired to enhance intelligence acquisition, offer better protection, improve mobility and fire power for troops on internal security operations, including those deployed to our northern frontiers as well as international peace support operations.
To the navy, President Akufo-Addo noted that Government has purchased Offshore Patrol Vessels and Fast Patrol Boats to enhance counter piracy and other maritime threat operations, and protect the country’s Exclusive Economic Zone (EEZ).
“Towards enhancing the capability of the Navy, I recently commissioned four (4) fast patrol boats, named VOLTA, PRA, ANKOBRA and DENSU, to protect our maritime resources, especially our offshore Floating Production Storage and Offloading (FPSO) facilities,” he added.
In the same vein, President Akufo-Addo noted that plans are in the offing to procure, for the Air Force, six (6) L-39 Ground Fighter Aircrafts, two (2) additional Ground Power Units, assorted aircrafts comprising Casa C2A5 Maritime Patrol Aircrafts, Mi-71SH Military Airlift Helicopters, VIP Transport Helicopters (H-225) and four (4) H-125 Reconnaissance Light Attack helicopters, to support the operations of the Special Forces.
Reiterating Government’s commitment to improve the healthcare and medical delivery capacity of the Armed Forces, he indicated that the 37 Military Hospital, which also serves as the National Disaster Management Hospital, has been prioritised for massive retooling, prior to the commencement of the next phase of the 37 Military Hospital expansion project.
Similarly, the five hundred-bed military hospital at Afari, in the Atwima Nwabiagya District of the Ashanti Region, will be ready for inauguration by December of this year.
“The expansion and upgrade of medical reception stations in all the Garrisons to District Hospital status are also on course. I want to add, furthermore, that adequate provisions have been made for other sister security services, including the Ghana Police Service, Ghana Prisons Service, Ghana National Fire Service and the Ghana Immigration Service, to receive new healthcare equipment for their smooth operations,” the President added.

Signs Of Syphilis In Infected Men And Women